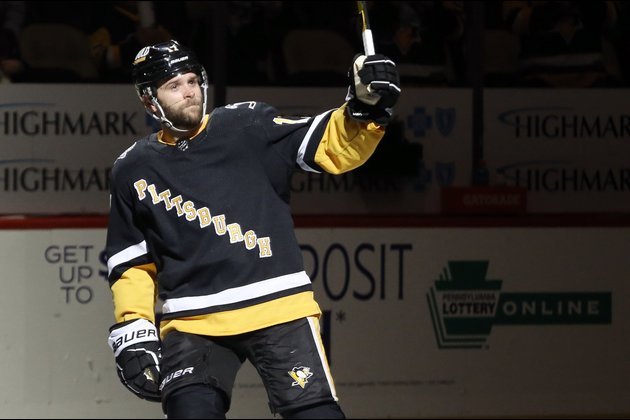 Evan Rodrigues and Bryan Rust each scored a hat trick Sunday and the Pittsburgh Penguins rode a six-goal first period to their eighth straight victory, 8-5 over the visiting San Jose Sharks.

Rust had a five-point game with two assists, while Jake Guentzel and Kasper Bjorkqvist also scored for thePenguins, who ended a two-week layoff.

Pittsburgh goaltender Casey DeSmith, playing in his first game since Dec. 11, made 22 saves.

After scoring the only shootout goal in Friday's win at Tampa Bay, Zibanejad recorded his seventh hat trick since joining the Rangers in 2016 as the Rangers completed the home-and-home sweep. .

Igor Shesterkin made 38 saves for his second shutout of the season and fourth career shutout. Tampa Bay goalie Andrei Vasilevskiy returned from a two-game absence in the protocol and allowed four goals on 21 shots.

Jeremy Swayman made 23 saves in goal and five different players scored to lift Boston to a road win over Detroit.

Tomas Nosek had a goal and an assist and Patrice Bergeron, Erik Haula, Charlie McAvoy and Trent Frederic each added goals for Boston, which won its second straight game.

Tyler Bertuzzi scored the lone goal of the game for Detroit, which lost its second straight overall and third consecutive at home.

Nathan MacKinnon had three assists and Darcy Kuemper stopped 29 shots for Colorado, which was playing for the first time since Dec. 16 due to a COVID-19 pause.

Cam Fowler and Sam Carrick scored goals, Kevin Shattenkirk had two assists and John Gibson made 32 saves for the Ducks, who lost their fourth straight.Anaheim was without its captain, Ryan Getzlaf, who entered the NHL health and safety protocol before the game.

Nico Hischier scored his second goal of the game with 2:04 left in overtime for visiting New Jersey, who capped a successful weekend with a win over Washington.

Yegor Sharangovich and Damon Severson scored in the first while Hischier scored in the second for the Devils. Goalie Mackenzie Blackwood made 27 saves as New Jersey tied a season high by winning its third straight overall.

John Carlson scored in the first for the Capitals, who had a two-game winning streak snapped. Goalie Ilya Samsonov recorded 33 saves.

Kyle Connor scored with 2:21 remaining in overtime to give Winnipeg the win over Vegas at Las Vegas.

Connor deked around Jonathan Marchessault at center ice and then went in on a two-on-one rush with Josh Morrissey before ripping a wrist shot from the right circle past Laurent Brossoit's blocker side for his 19th goal of the season and the game-winner.

Elias Lindholm scored the go-ahead goal on a power play, Johnny Gaudreau had a goal and two assists, and Jacob Markstrom made 30 saves to lift visiting Calgary to a victory over Chicago.

Soderblom has played the past five periods in net for the Blackhawks, losers of four straight. Soderblom made 37 saves Sunday, including a stop of Dillon Dube on a penalty shot with 7:46 remaining in regulation.