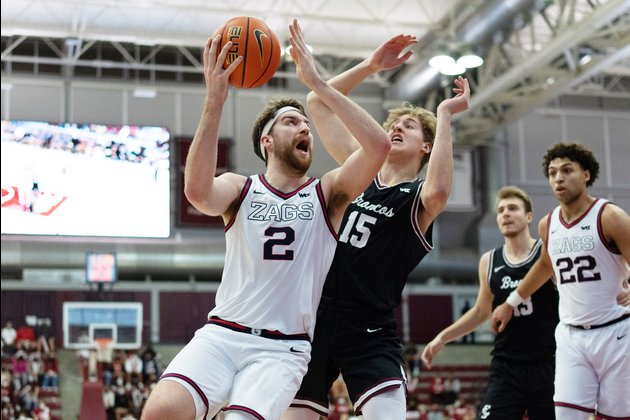 Drew Timme, No. 2 Gonzaga cruise to victory over Santa Clara

Drew Timme hit for 32 points on 14-of-18 shooting from the field and six players reached double-digit scoring as No. 2 Gonzaga cruised to a 115-83 victory against host Santa Clara in a West Coast Conference game Saturday.

Andrew Nembhard added 19 points and six assists, and backcourt mate Rasir Bolton had 12 points and seven assists for the Bulldogs (14-2 overall, 3-0 WCC), who were playing their first true road game of the season.

The Zags scored 100-plus points for the third straight game, the longest streak in school history. They defeated Pepperdine 117-83 a week earlier and topped BYU 110-84 on Thursday.

The Broncos were coming off a conference-opening 84-70 victory at Pacific on Wednesday, in which coach Herb Sendek earned his milestone 500th career win.

But Santa Clara's defense was no match for the Zags' high-powered attack.

Gonzaga took control early, breaking a 6-6 tie with a 12-0 run. Timme scored six points during the span, with Holmgren and Bolton each adding 3-pointers.

Timme had 21 points in the first half as the Zags led 60-41 at the intermission.