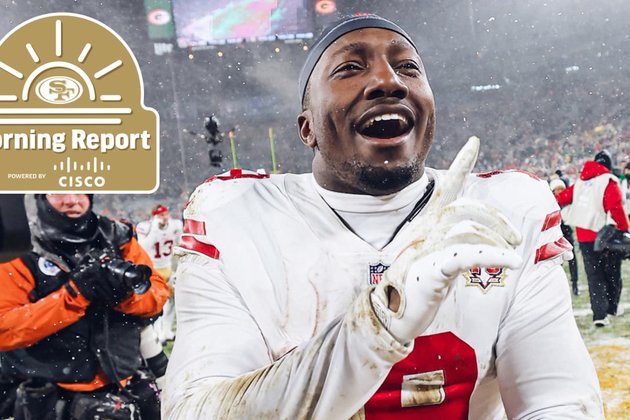 Morning 49ers To Take on Rams After Win in Green Bay

Here are your top 49ers storylines for Monday, January 24.

If you were anticipating an NFC Championship showdown between two former New England Patriots signal callers or even a face-off between two of the league's premiere tight ends, you will have to wait another year for that after the Tampa Bay Buccaneers were eliminated from the postseason on Sunday.

Instead, the San Francisco 49ers will see their third matchup of the year against the NFC West-Champion Los Angeles Rams in the conference championship game.

49ers Head to NFC Championship on the Efforts of Special Teams, Defense

If I told you the league's 26th-ranked special teams unit aided the San Francisco 49ers to their second NFC Championship appearance in three years, would you believe me?

Well that was the case on Saturday as the 49ers fought their way back from a scoreless first half to a walk-off field goal in the low-scoring 13-10 victory. Of note, the weather at kickoff was 14 degrees. The wind is blowing 13 mph. This is the fifth-coldest playoff game at Lambeau Field.

Here are a few takeaways from the contest >>>

The San Francisco 49ers have advanced to their second NFC Championship in the last three seasons following Saturday's 13-10 road win over the Green Bay Packers. While trailing the entirety of the contest, an outstanding performance by San Francisco's defense and special teams unit helped set up kicker Robbie Gould with the game-winning 45-yard field goal as time expired.

Here are some stats and notes from the 49ers Divisional Round win over the Packers.

The 49ers improved to 5-4 all-time against the Packers in the postseason. With Jimmie Ward's block of Packers kicker Mason Crosby's 39-yard field goal attempt and Jordan Willis' block of Packers punter Corey Bojorquez's punt, the 49ers became the first team to block both a field goal attempt and a punt since 1/1/89 when the Buffalo Bills accomplished the feat vs. the Houston Oilers (AFC-D). Robbie Gould connected on field goals of 29 and 45 yards. He remains a perfect 20-of-20 in his postseason career, including a 12-of-12 mark with the 49ers, which ranks tied for second all-time for most field goals made in franchise history.

It all came down to the fourth quarter.

After a slow start from the San Francisco 49ers, a series of dramatic plays helped push the underdog team to come out on top over the No. 1 seeded Green Bay Packers.

Down by a score with less than five minutes in the game, defensive lineman Jordan Willis blocked a punt by Corey Bojorquez. As the ball rolled to the inside of the 10 yard line, rookie safety Talanoa Hufanga scooped it up and took it to the end zone to tie the game. Robbie Gould finished the game with a walk-off field goal, further perfecting his record of 20-for-20 on field goals in the playoffs, the best in NFL history.

Here's a list of some of the best tweets from around the league and fellow Bay Area teams as the 49ers head to the NFC Championship.