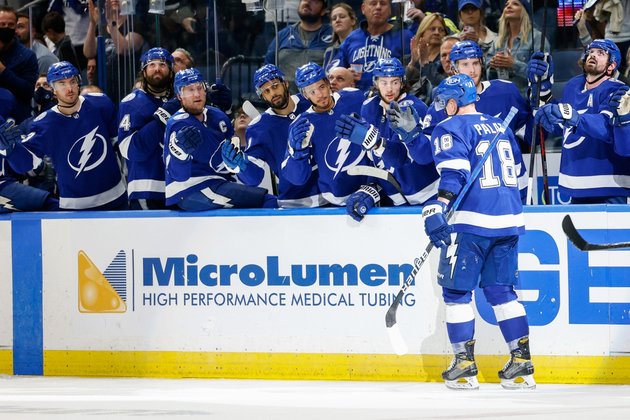 Good news, bad news for Lightning in game vs. Devils

With only eight games remaining between Thursday and the end of February, the Tampa Bay Lightning will look to get one player back as another departs.

The Lightning are expected to have Ondrej Palat back in the lineup for Thursday's home game against the New Jersey Devils.

That could keep the right winger out of the Lightning's three-game homestand against New Jersey, the Vegas Golden Knights and the San Jose Sharks.

But getting Palat back on the top line after a five-game absence is the good news.

While he is excited to return to the ice, Palat said he welcomes eight games in five weeks, an easier workload created after the NHL decided to keep players out of the Olympics and focus on rescheduled games.

"I think it's a good thing for the whole team," said Palat ,who practiced Wednesday on the first power-play unit. "Take a break, relax, heal up because the last two months of the season are crazy with so many games. We're going to need that energy and everybody to be in top shape for those two months."

On Nov. 20 in Tampa Bay, the Devils were victorious 5-3 in their only meeting this season. They scored four third-period goals to erase a 3-1 deficit.

The second match between the teams, Jan. 10, was postponed after New Jersey's Damon Severson and Janne Kuokkanen entered COVID-19 protocol. The game was rescheduled for Feb. 15.

In their most recent game, the Devils were trounced as the visiting Dallas Stars scored three times in the first period in a 5-1 victory, with New Jersey getting scorched by 37-year-old Joe Pavelski in a two-goal, two-assist outing.

Roope Hintz then scored 15 seconds into the next period for a 4-0 hole that the home side could not escape.

Jesper Bratt netted his team-leading 14th goal on the power play to give him a six-game point streak, but little else went well for the Devils.

Starting goalie Akira Schmid was replaced early after surrendering three goals on seven shots. Jon Gillies came in and stopped 23 of 24 shots before Dallas scored into an empty net.

"Jon and Akira have done a good job, and it is up to us to make sure that they feel comfortable and they play their best game," Bratt said.

Dougie Hamilton (broken jaw) and Ty Smith (upper-body injury) will travel to Florida with New Jersey, but Mike McLeod -- who suffered an undisclosed injury in a fight with the Stars' Luke Glendening -- will stay behind.